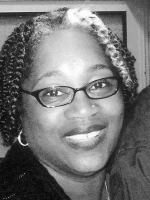 Yvonne Blackmon was born in Grenada, Mississippi. However, Marion has been her home for most of her life.

While growing up in Marion she developed the love for running without her shoes. Racing people in the streets was her specialty and Washington Street was her track. Her father was the first to notice her running abilities and encouraged her to run track at Marion High School. Yvonne was also approached by Sally Leyse, who was her physical education teacher and the girls track coach at Marion.

Yvonne started running varsity as a freshman and still owns school records in the 100 yard dash, the 220 yard sprint and the member of the 440 relay team.

In 1976 there were five Indiana girl All-Americans and Yvonne was one of the five. They were called the “American Track Performers” by the Amateur Athletic Union for the Junior Olympic Region IV Team, which ran meets around the country. She was also listed #11 on the All Time Indiana High School Track and Field Top 25 Performance- Girls in the 100.

As a senior in 1977 Yvonne was the anchor on the 440 yard relay team. They worked themselves into the Giant recorded book by winning the IHSAA event at the state meet. They became the first Marion girls’ team to win a state title.

After high school Yvonne attended Marion College (Indiana Wesleyan) in the physical education department. In 1980 she had the opportunity to work with high school and middle school students on positioning themselves properly while using the starting blocks.

Yvonne is married to Mark Edwards and has a daughter, Bonica. And yes, James Blackmon Sr. is her baby brother.