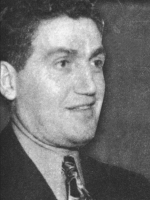 Woody Weir was a native of Scottsburg, IN. He attended Scottsburg High School and graduated in 1930. Woody had an outstanding career in high school, both in the classroom and in athletics where he excelled in basketball and track.

Attending Indiana University on a basketball scholarship from Coach Everett Dean, Woody played three years for the Hoosiers before he tore his knee which ended his track career, but in basketball Woody was team captain, named to the All-Conference team and won the Balfour Award in 1933 and 1934. Woody started his coaching career at French Lick High School and moved to Jasper High School where he had outstanding teams. It was here that he entered the military in the early ‘40s. Receiving his discharge, Woody went to Stanford University to work on his masters and serve as the assistant basketball coach for Everett Dean. Upon receiving his masters, he moved back to Indiana and was hired as the basketball coach at Marion in the fall of 1946.

Woody’s first Giant team finished the regular season 10-8. They went on a roll all the way to the State Finals before losing to the undefeated Terre Haute Garfield team and Clyde Lovellette, 59-50.

Woody would eventually serve 12 years coaching basketball at Marion High School: winning 9 sectionals, 6 regionals, and 2 semi-states. He was held in high esteem by many basketball coaches around the state and was known as “The Tournament Coach.” In 1975, Woody was elected to the Indiana Basketball Hall of Fame for his outstanding career as a player at Scottsburg High School and at Indiana University, and for his outstanding career in coaching basketball at French Lick, Jasper, and Marion High School. Following his retirement from coaching in 1958, he was appointed as the 1st Supervisor of Elementary P.E. in the Marion Schools. Former teachers and students still talk about him today, about the job he did in that capacity...they all loved Woody! His wife, Kathryn, was a very successful Music Teacher in the Marion Community Schools for many years. She and Woody had two children, Reid and Nancy. Reid presently lives in Sheboygan, Wisconsin. Nancy is married to Tim Selby and they live in Bellingham, Washington. All of the family was extremely proud of Woody. Woody was an outstanding Teacher, Coach and a real Gentleman. Woody contributed so much to Grant County Sports. Woody died on August 15, 1989 at the age of 77, and Kathryn passed away on January 16, 1994, also at the age of 77.