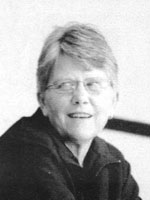 Grant County/Volleyball/Winning/Championships/Wilma Cox... none can be said without the other.

Wilma Cox came to Eastbrook High School in 1976 to teach mathematics. As she was sitting in her classroom during her first few days of school, the superintendent came by to say they needed a volleyball coach and would she agree to coach the team. She agreed, even though she was unfamiliar with the sport. Wilma, who graduated from Eastbrook High School and Purdue University respectfully, had never attended a volleyball match.

At her first volleyball match she was responsible for both junior varsity and varsity. She told her team members, "Here is the line-up" and that was the extent of her coaching that evening.

Wilma began attending clinics and taking classes at Ball State to learn more about the sport she had been given to coach and to build. After 32 years of coaching high school volleyball at Eastbrook, her stellar career speaks for itself. The determined, self-taught Coach Cox did build a program which gained winning seasons, and tournament championships, and amassed distinguished coaching honors.

Compiling an overall record of 609-324 spanning her volleyball coaching career at Eastbrook makes her the winningest high school coach in Grant County in any sport. These wins include seven sectionals, one regional championship, and 12 Conference Championships in the MIC and CIC. The Panthers had teams ranked No.1 and No.2 in statewide polls with Wilma at the helm. Wilma had the privilege to coach two Grant County greats and former Sports Hall of Fame recipients, Dawn Davenport Begor, and Janna Bragg Warren.

In 2003 Wilma received the National Federation of State High Schools Association Indiana Fever Coaching Award and in 2006 the Indiana Coaches of Girls' Sports North Volleyball named her Coach of the Year for Class 2A. Wilma earned an exemplary reputation for her superb coaching skills as well as a strong commitment to her school, community, and students. The high standards Wilma set forth for herself were easily absorbed by her athletes simply by her example. The Grant County community has been witness to the volleyball teams at Eastbrook High School displaying her disciplined approach to the sport.

Wilma retired from volleyball coaching in 2007, leaving at the height of her career stating, "I want to go out while I still love what I do." On volleyball game days, at Eastbrook you may just find Wilma driving the team bus to an away meet or keeping the scorebook. Wilma resides in Grant County and continues to teach mathematics for Eastbrook Community Schools.