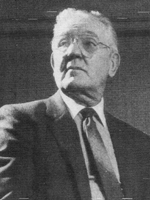 A standout athlete, game official, and long-time director of the Marion Parks and Recreation Department, Mutt Chambers spent a lifetime involved in athletics and enriching the lives of local youths.

Chambers was a fine football and basketball player for the Marion Giants and graduated in 1935 during the Great Depression. College wasn't an option, but Chambers continued to play basketball for the Draper Dodgers and Hoosier Comets independent teams.

At one of those games, University of Kentucky basketball coach Adolph Rupp was in attendance and invited Chambers to try out for the Wildcats. Afterward, Rupp showed Chambers around Lexington, Kentucky, and in the process told him 'Son, you can play for Kentucky'." By then, Chambers was married and had a job, but just hearing Rupp say those words was quite a thrill.

Chambers went on to become Marion parks director, a position he held for more than 40 years. Under his guidance, the local park system was considered one of the state's finest. Chambers built up the fast-pitch softball leagues and brought some of the Midwest's top teams to compete at Matter Park and later was inducted into the Indiana American Softball Association Hall of Fame. He personally taught thousands of local youths how to swim in the park's pool, and in the wintertime the Industrial and Civic basketball leagues were filled to capacity at the Marion Armory.

Chambers officiated basketball and football games for 25 years before retiring in 1968 and was highly respected for his professionalism and ability to keep a game under tight control.

In 1939, Chambers married his high school sweetheart, Barbara Moore, and they had two sons, Jim and Joe.