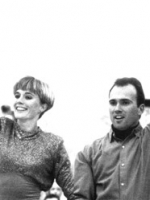 The Seybolds won multiple medals at the U.S. Figure Skating and World Championships and then embarked on a long professional career. Wherever they went, the Seybolds never forgot their Marion roots and brought worldwide attention to their hometown.

Starting out in roller skating under the tutelage of Jack and Ingrid McManus, the Seybolds set their sights on the Olympics in their early teens. It would not be easy or inexpensive, but the Seybolds' parents, John and Jean, made the necessary sacrifices to help theirchildren obtain their goals.

With their Olympic dreams becoming a reality, the Seybolds still had to finance their trip to Canada and on to the '88 World Championships. Marion High School principal Marge Record led a fund raising effort, and the city of 35,000 donated more than $45,000 for the Seybolds.

At Calgary, the Seybolds became a television sensation with their personal story and community support. It was irrelevant they skated to a 10th place finish and missed out on a medal. They had triumphed over all the obstacles and hardships along the way.

The Seybolds finished their amateur careers in 1989 with a second at the U.S. Championships and an eighth at the World Championships, equaling their best finishes in both events. Later that year they began a decade-long pro career. Kim competed many years with a benign brain tumor that has required three operations. She continues to teach skating in Westfield. As for Wayne, he returned to Marion and became mayor in 2003. He was re-elected in 2007.