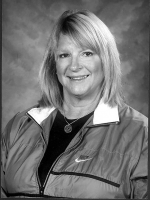 Vonda Cawthorn began her passion for gymnastics at Madison-Grant High School as a gymnast on the sectional championship team. It was the first time gymnastics was included in the IHSAA Tournament. When she was a senior at Ball State University she coached the Madison-Grant Argylls gymnastics team. In 1979 Vonda began her teaching career as a substitute at McCulloch Junior High School and was hired as Marion High School’s head gymnastic coach. When she began coaching, she coached three separate teams beginning, intermediate, and optional. This later changed to all optional with a junior varsity and a varsity team.

Marion High school had three teams compete at the state finals in: 1985, 1988, and 1989. Marion finished 5th in ’85, 4th in ’88 and 4th in ’89. In 89 outstanding sophomore gymnasts Sarah Pack was the All-Around champion and also won vault. This was a highlight of Cawthorn’s career to have the best gymnast in the State on her squad. Marion gymnasts won sectionals in ’80. ’82, ’83, ’85- ’92, ’94- ’99, ’01, ’02. Marion gymnasts also won North Central Conference Championships in ’82, ’85, ’86, ’88- ’92, ’94, ’95, and 2000. Marion was the first conference school to win five championships in a row in gymnastics. Vonda received Indiana Coaches of girls sports association district 2 Coach of the year in 1987-1989. She served on the gymnastic Committee in the ICGSA for 6 years and was one of four coaches who were able to change the state gymnastics meet format from five teams competing at the state meet to 9 teams being able to compete. This was a long hard process which has to be presented and passed by the coaches, athletic directors, and the IHSAA staff. This is a great accomplishment that she was very proud to be a part of. Vonda received her ICGSA twenty year coaching plaque. Marion had 51 state finalists. She took two gymnasts her first year at Marion.

In 2001 the Ball State Alumni Association awarded Vonda Alumnus Gymnastic Coach of the year. In 2002 Vonda was recognized for educational excellence in Who’s Who among America’s teachers in Physical Education. Vonda coached the Giants for 23 years retiring in 2003 to spend more time with her daughter’s athletics. Cawthorn won 88.5% of her regular season meets 230 -30. Vonda coached the Giants to 20 Sectional wins, 11 North Central Conference championships, and 3 regional wins. She is very proud of her teaching career at Marion Community Schools with 32 years of dedicated service.

She is currently teaching at Justice Thurgood Marshal Intermediate School. She resides outside of Fairmount, Indiana with her husband Stan and daughter Christen.