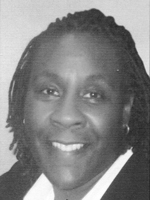 Trena Keys has written her own success story both on and off the basketball court. She was a verytalented playerforthe Marion High School girls' basketball team. She was named Indiana's Miss Basketball in 1982 as well as a Parade Magazine All-American. Keys played a starring role as the Giants reached the IHSAA state Final Four that same year. She finished with 1,362 career points and despite all the outstanding players to have played in Grant County since she graced the local hardwoods she still rates as the Grant County No. 9 all-time scorer.

Her hard work, natural ability, high jumping and smoothness made her an all-around outstanding player. Naturally, she attracted numerous colleges, but she decided on Notre Dame where she received a full scholarship. She scored 1,589 career points at Notre Dame and over 20 years following her graduation, she still stands seventh on the all-time list. She's still sixth in career point average with 14.3. She's eighth on the school list with 78 double figure scoring games. Keys is seventh in most points in one season with 587 in 1985-86. Her 19.6 average in 1985-86 puts her fourth among highest scoring averages for a season. She made 250 field goals in the 1985-86 season to be fourth on that list. She was Notre Dame's all-time leading woman scorer from 1986 when she graduated until 1993. She was team captain in 1985-86 and was most valuable player of the North Star Conference. Keys played in 111 games for Notre Dame. She made 690 field goals and 209 free throws. Trena could shoot away from the basket, too, but the three-point shot didn't come into play until a year or so after she graduated.

She majored in marketing and got a BA degree in business administration. There's life after basketball and Keys certainly found it. She started as a customer service manager for Proctor & Gamble in Chicago. Trena was vice president of PepsiCo Sales in Chicago from 2004-08 and currently is VP of QTG Sales for the same company in the same city.