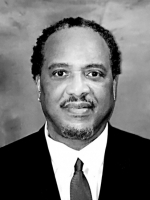 Anthony “Tony” Thompson was born to Thomas and Mae Thompson in 1965 and raised in Marion. At the age of seven Tony began to hit rocks behind his home with a 2x4 he found after watching his father play in the slow-pitch softball team Little Harlem. Recognizing his innate talent Tony’s father immediately began teaching him the fundamentals of baseball. By age nine, Tony was playing Lincoln Field Little League and was the first and only Little League player to be in Sports Hotline’s, “Sports Spotlight” feature. Tony went on to play throughout his youth, including Jone’s Junior High, before beginning his run as a Marion Giant.
Thompson’s wide scope of talents went into making him a remarkable baseball player. He could hit for power, average, had incredible speed, good defense, a strong arm and he was a leader. Serving as team Captain for the 1984 Giant’s State Championship team, Tony has often been credited as essentially winning the championship game hitting a three-run double in the fifth inning giving the team a 4-2 advantage leading to the team’s ultimate victory. During the 1984 state championship radio broadcast WBAT sports announcer Jim Bruner made the statement, “Tony Thompson is most probably the greatest baseball player in Marion High School history.” He was voted co-MVP of the championship team.

Thompson was recognized by sports author William G. Eidson in his book, “State Champs, The Final Four in Indiana Baseball,” (1991) naming Thompson his choice as “The Best of the Best” for centerfielder in Indiana Final Four History. Eidson states, “Thompson is an excellent example of a player who had power, speed and ability to hit for average. For the season his offensive accomplishments included eight home runs, thirty-three stolen bases and a .468 batting average. Exceptionally fast, Thompson repeatedly reached first base from home plate in 4.0 seconds and could run sixty yards in 6.5 seconds.” Thompson was named to the Indiana High School Baseball Coaches All-State team, by automatic berth, but while in his senior year was drafted by the MLB association.

On June 5 of 1984, Tony was drafted by the New York Mets in the seventh round. He played three years reaching AA level before retiring from his baseball career in 1987.

Tony has resided in Orlando, Florida since 1997 with his wife Ginnie Love-Thompson, Ph.D. and their two daughters. Thompson and his wife share a passion for nature and traveling. ﻿