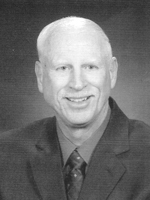 Terry Porter is in his 20th year as the women's head tennis coach at Indiana Wesleyan University. His team won the Mid- Central College Conference regular season and tournament in the fall of 2010 for the 19th consecutive year. Indiana Wesleyan is currently ranked 15th nationally in NAIA. A 13-0 record stretched its winning streak in the regular fall season to 195 matches dating back to 1995. Porter's overall record since the women's tennis program was started up again in 1991 is 349-35. He will take his team to the NAIA National Tournament in 2011 for the 14th straight year.

Terry is in his 45th year as Associate Professor of Mathematics at Indiana Wesleyan University. He and his wife Betty are parents to Doug Porter and Deb (Porter) Wuertley, who are both accomplished tennis players. They have six grandchildren.