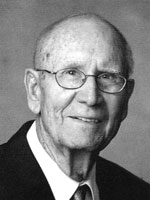 Ted Wright started playing basketball in 1940 at the YMCA in Marion. Most players at that time used two hands to shoot free throws and set shots. Ted, ahead of his time as a youngster, developed a one-handed free throw and set shot.

While attending Jefferson Township High School in Upland, Ted earned 11 varsity letters in basketball, baseball and track. Ted was the leading scorer for the Jefferson Yeomen all four years in the Grant County Tournament. The track program began during Ted's sophomore year. He held the high school broad jump record for 12 years.

Ted entered Taylor University in the fall of 1948. He played basketball, baseball, and broad jumped for the track team, all four years. Ted earned basketball All-Conference Honorable Mention in 1950. In 1951 and 1952 he was named First Team All-Conference in basketball. He was the Hoosier Conference Tournament's Most Valuable Player in 1952. Ted scored 1283 points during his Taylor basketball career. He was the et a single game scoring record of 34 points, and is a member of Taylor's Hall of Fame.

﻿Ted starred in baseball for four years leading the team in hitting in 1952 with a .371 batting average.

After graduating from Taylor University in 1952, Ted entered the Army. While stationed at the Dugway Proving Grounds near Salt Lake City, Utah, Wright was the player coach in basketball and manager of the baseball team.

Ted taught at Matthews and East Elementary Schools from 1954 to 1964. His coaching career at Taylor University, Mississinewa and Eastbrook High Schools covered a 20 year span in basketball, track, baseball, football, and cross country.

Ted transitioned from teaching to banking, serving as President of Star Financial Bank in Upland from 1965 until his retirement in 1992. Wright, and his wife Julia reside in Upland.
﻿