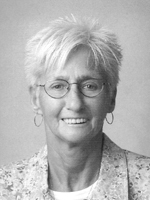 Sue Bowman began her coaching career at Indiana Wesleyan University, then known as Marion College, in 1970. That was only the second year for women's athletics at the school. She coached women's field hockey, women's tennis, and volleyball in her first year. As the 70's went along, she also was head coach in women's basketball and women's track and field.

She coached field hockey from the late 70's until 1988. She was the only field hockey coach in the school's history with her 1980 team winning the women's state championship, which involved all colleges in the state.

Bowman became the first IWU softball coach in 1988 and remains the coach in that sport today. Field hockey was discontinued in 1991, and Sue became, for one season, assistant women's soccer coach in 1992.

It all adds up to 40 years of coaching at Indiana Wesleyan University.

Bowman is active in the community serving on the Boards of the American Red Cross, YMCA, and the Indiana Association of Health, Physical Education, Recreation & Dance.