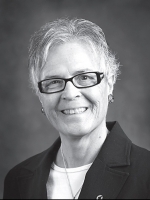 Sally was raised on a farm in Adams County and graduated from Adams Central High School in Monroe, Indiana in 1969. She was involved in all sports, lettering in volleyball, six player basketball, softball, and track.After graduating from high school, Sally played one year with the All-American Red Heads, a women’s professional basketball team. They traveled throughout 35 states, playing against men’s teams, compiling a record of 176-25.

In 1970, Sally enrolled at Ball State University where she lettered in field hockey, volleyball, and lacrosse. Sally graduated with a Bachelor of Science degree in 1973 and began her career with Marion Community Schools. She completed a Master of Arts degree in 1978.

Sally moved on to college coaching in 1980 at William Penn College in Oskaloosa, Iowa. That year the team finished third in the AIAW Division II National Championship with a 28-10 record. She then got the call from the University of Puget Sound in Tacoma, Washington where she was the women’s Basketball Coach and Associate Athletic Director. Sally’s seven year record at Puget Sound was 121-80 and was named 1988 NAIA District Coach of the Year.

﻿In 1989,Sally left coaching and accepted a position as Assistant Athletic Director at Idaho State University, Pocatello, Idaho. In 1991, she entered graduate school to pursue a Master’s Degree in Mental Health Counseling, graduating in 1994.

Sally accepted the position of Mental Health Clinician for the Twin Falls School district in 1994, working with their most at-risk students, a position she holds today.Sally also has her own private practice.

﻿In her leisure time, you will find Sally on the golf course at the Jerome Country Club where she has been a club champion numerous years. She is looking forward to retiring soon to spend more time on the golf course.