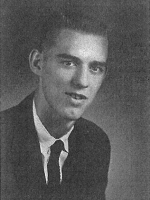 The powerfully built 6’6” Horn starred for Mississinewa’s basketball teams in 1955-56 and 1956-57. The Indian junior led the county in scoring and helped the Indians to a 22-1 record. The only loss came at the hands of the Marion Giants in the sectional finals 57-56. In his senior year they had a record of 20-3, again losing to the Giants in the sectional finals 68-62. The six point deficit was their largest in a defeat. Ronnie averaged 27 points his senior year.

Ronnie Horn held every Mississinewa scoring record. Most of those records were previously held by 1954 Indiana All-Star and Michigan State standout Larry Hedden. Like Hedden, Horn was an Indiana All-Star in 1957.

Taking his talents to Coach Branch McCracken’s, Indiana Hoosiers, Ron was the 6th man during his sophomore year. At the end of the season Horn was 3rd leading rebounder for the Hoosiers. At the end of the school year Horn left IU to join the Army, where he traveled on the World Army All-Star Team.

Just months before Ron was to be discharged, he was granted an early leave because he was drafted by the St. Louis Hanks, now the Atlanta Hawks, in the 2nd round of the 1959 NBA draft.

In addition to the draft, Ron earned an alternate spot for the 1960 Olympic team. This team consisted of Oscar Robinson, Jerry West, Jerry Lucas, Walt Bellany and Terry Dischinger.

Being traded by the Hawks, Ron found a new home with the Los Angeles Lakers. There he played in the World Championship Games against the Boston Celtics. The Celtics swept the Lakers in four games. After the Lakers Ron had a short stay in the ABA.

Following his retirement from basketball, he was employed by the Pennsylvania State Corrections Department as a counselor with the Youth Development Center. Ronnie Horn was selected to the Indiana Basketball Silver Anniversary Team in 1982.