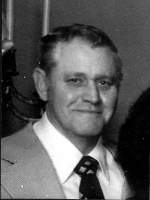 Pat Klein was one of the finest and most revered basketball players ever to come out of Marion High School. He was a late-bloomer as far as basketball was concerned, for he struggled some through his sophomore and junior seasons. His high school coach, Woody Weir, said he was amazed at the progress Pat made between his junior and senior years, it was an outstanding senior year for Pat Klein.

Pat is probably best remembered for an unforgettable State Tournament when he helped the Giants reach the State Finals for the second time in four years.

After finishing the regular season 10-10, Klein and the Giants went 7-0 in tournament play before losing to top-ranked Madison in game one of the State Finals, 50-49.

Pat, who scored over 20 points in five of the team’s tournament games, finished with 22 points in his final game in a Giant uniform.

In post-game ceremonies, Pat was named the winner of the Trester Award for Mental Attitude and later was named Indiana’s Mr. Basketball for 1950, thus becoming the first Indiana basketball player to win both awards.

Pat was named to the Silver Anniversary Team in 1975 and in 2011 was inducted into the Indiana Basketball Hall of Fame.