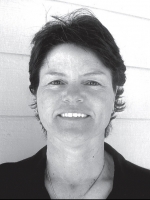 Robin Scott attended Madison Grant High School from 1983 – 1987, lettering in several sports during her high school career. She lettered in track by participating in the 800, 4x1600, shot put, and went to sectional in the discus. Robin lettered in tennis two years, playing number one doubles. She played volleyball two years, making All-County in 1985 and 1986, and was selected All-Central Indiana Conference in 1986. Although softball was not offered as a school sport, Robin participated in local leagues from age 5 to 18.﻿
During her basketball career, she had single-game highs of 42 points, 20 rebounds, nine assists, and 12 steals in various games. In 1985 and 1987, her team won the sectional and in 1987 they won the Grant Four Tournament. Robin averaged 20 points and nine rebounds per game her junior year, and 21 points and 10 rebounds per game her senior year.﻿
Individual honors include 1987 Hoosier Basketball Magazine 2nd team All State and Associated Press All State Honorable Mention. She was All County four years, All Sectional four years, and All Regional her sophomore (1985) and senior years (1987). She was named to the Anderson-Herald All-Area Girls’ team in 1987. She was voted team MVP her sophomore, junior, and senior years. In 1986, Secretary of State Ed Simcox presented Robin with the Meritorious Hoosier Award. She was the 1986 Grant County Girls’ Player of the Year and Co-Player of the Year on 1987. The Sports Hotline named Robin the Female Athlete of the Year in 1986 and 1987. In 1987, she was selected for the Girls’ Invitational Workout by Hoosier Basketball Magazine. Robin set, and still holds, many records at Madison Grant including scoring, assists, steals, and rebounds.﻿
After high school, Robin attended IPFW from 1987-1991. While there, she participated in three sports: tennis and softball two years, and basketball four years. Robin took her team to the NCAA tournament in 1989 and 1990. While at IPFW, Robin reached the record books in many categories including total points (1527). She shot 48% from the field and 75% from the free throw line. She pulled down 662 rebounds and had 52 blocks. She rounded out her game with 219 steals and 262 assists in her collegiate career.﻿
After graduating from IPFW with a degree in Criminal Justice, Robin began working at United Parcel Service where she has been employed for 23 years. In 2012, she was named to the Indiana Hall of Fame Silver Anniversary Team. She lives in Ft Wayne where she still participates in the sports she grew up loving and playing.﻿