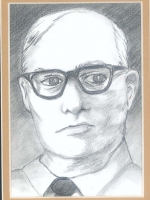 Bob Lee was the Marion Leader - Tribune sports editor for 26 years before his death at 55 years of age.

Born in Fairmount, Mr. Lee was a graduate of Fairmount High School where he played 4 years of basketball. Bob was a member of the Quakers’ basketball team that won the sectional in 1929, the first time any team other than Marion had won. After high school Bob graduated from the University of Alabama.

Bob Lee was well-known throughout the Grant County area and the state of Indiana serving as President of the Indiana Sportswriters and Broadcasters Association.

It has been said that Bob Lee never missed attending the Indiana State High School Basketball Finals from 1946 through 1967, and rarely missed the Finals of the state high school track meet. While covering the sporting events his style was always in a sports coat, white shirt, and tie.

The Marion Chronicle - Tribune, along with his family, established the Robert E. Lee Scholarship in his honor in 1967.