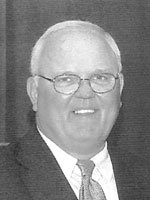 The name Rick Atkinson is synonymous with not only baseball, but also with Gas City, Indiana. From the time he was a young boy he has had a love of baseball that has developed into a lifetime of memories.Rick graduated from Mississinewa High School in 1965, after earning 11 varsity letters, nine of which won conference championships. He also played six years of American Legion Baseball for Jonesboro Post 95, which earned him a trip to the state finals. Also during this time he spent many years playing baseball with the Twin City Bankers.

After graduation, Rick played three years of baseball with Taylor University and was conference champion, representing Indiana in the N.A.I.A. Area 6 Tournament all three years. He then transferred to Greenville College (Illinois) where they became conference champions. During his time at Greenville, the team had a record of 20-5, Rick led the nation in home run averages (12 in 22 games or 1/2 home run per game) and was third in RBI average per game (1 ½), all while hitting .438.

After graduation from Greenville College, Rick signed with the Atlanta Braves in 1969.

During this time, Rick spent five years with the Plymouth Club Bombers, with three of those years winning the state championship and two years as runner-up.

Rick then returned to his alma mater, Mississinewa, where he spent the next 27 years, including two years as varsity wrestling coach, 20 years as varsity baseball coach, and 24 years as athletic director. During this time, Rick served 13 years as the secretary-treasurer of the Central Indiana Conference and one year as president of District 2 of the Indiana Athletic Director's Association. He also played host to numerous girls' basketball sectional tournaments and one regional tournament.

Rick spent five years as the Little League Baseball Camp Director in Indianapolis at their Central Regional Headquarters. He coached four years in an independent professional baseball league for both the Anderson Lawmen and the DuBois County Dragons.

In 2003, Rick was inducted into the Indiana Baseball Hall of Fame. Rick is currently on the baseball coaching staff at Taylor University. He married his high school sweetheart, Sondra, 44 years ago. They have three children, Molly, Abby, Adam, and seven grandchildren with their eighth on the way.