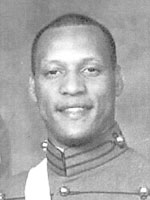 The debate rages on forever - who is the best athlete to ever wear the purple and gold at Marion High School? Many names come to mind, but when you really break it down, did anyone ever have the senior year that Reggie Nevels, Jr. had in 2000?

This young man, who went on to play quarterback four years at West Point, started his senior season by leading the Marion Giants to a huge upset over Homestead High School in the 2nd round of the IHSAA football playoffs. Reggie separated his shoulder during the first half of the ballgame, but continued to play the second half with the injury not being able to throw the football.

In basketball his senior year, the Giants faced powerful Warsaw for the semi-state title. Al Rhodes, Warsaw basketball coach, double teamed Zach Randolph shutting him down, and it was time for Reggie, "The Moose", to get Loose, as he made several big shots leading the Giants to the semi-state win and the State Title the following week.

Reggie had a dual role in the spring combining baseball with the NCC champion track team as a high jumper. He stole the show at the State meet finishing 2nd, losing on his final jump, though he did set a school record in the high jump.

He received 16 varsity letters in four sports, also setting a school record.When the debate begins about the "Marion Greats", Reggie Nevels, Jr. will be remembered as a "True Giant". Reggie continues to work for the U.S. Army now that his days of active service are complete. He lives in Texas with his wife and sons.