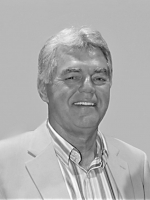 At Ball State University, he was on the basketball team his freshman and sophomore years. During his freshman year, Don Shondell, the men’s volleyball coach encouraged Reece to try out for volleyball. Reece heeded his encouragement and played volleyball for 4 years. His senior year, Reece was named MIVA Conference 1st Team and MVP of the Ball State team.

“Having been a head coach for over 40 years at both the high school and collegiate level, Reece is the best coach I have ever coached with. If you would ask any player we ever coached who their high school volleyball coach was they will all tell you Steve Shondell and Reece Peacock. Reece positively impacted the life of every player he ever coached and that pretty much says it all. Our players loved playing for him, considering Reece a second dad as he was truly a father figure.”