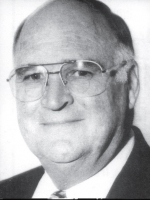 Living across from the Fulton School gym gave Phil McCarter the opportunity to watch a practice and observe coaching at an early age. He grew up with a love for sports. He graduated from Fulton High
School in 1947, having played varsity basketball for four years, scoring 1182 points in his high school career. In 1947, he was chosen as the
Fulton County Outstanding Basketball Player. Phil went on to play at Ball State University, and lettered three years in both basketball and baseball.﻿
His first coaching position was at Akron High School from 1951-56. He recalls the highlight of this position was coaching the many dedicated young men who had a love of basketball, thus winning the Peru Sectional in 1956. Coach Phil then moved to Converse and led the Borderman until 1959, when the consolidation of Oak Hill was formed. He was chosen as head basketball coach and was assisted by Bob McDonald until 1966, compiling a record of 125-43. During the first three years, the Oak Hill Golden Eagles won three consecutive sectionals at Marion. They also won several Grant County Invitational Tournaments. Phil felt blessed to have been a part of the new school and to work with the fine teaching staff and young people who had a great sense of school spirit and love for athletics. These people have become lifelong friends.﻿
Phil then became principal of Oak Hill High School and held that position until 1971 at which time he and his wife, Katie, moved to Rochester with their family to become the owner of B and B Men’s Clothing Store. He continues to work part time at the clothing store along with his son John. At Rochester High School, Phil was assistant basketball coach for seven years, giving him the opportunity to help coach his own children who share his passion for sports. Phil retired 1988 after 37 years in education. His overall basketball record is 227-102, winning five sectionals, and seven county championships.﻿

In 2007, Phil was inducted into the Indiana Basketball Hall of Fame and credits his success to his athletes, coaching staff, and supporting fans. He strived to set an example of high standards for his players. His love of sports continues as a loyal supporter and enjoys attending his grandchildren’s activities. Phil is active in his church and is a 55 year member of Lions Club. He and his wife were chosen for the Rochester Community Service Award in 2010.﻿