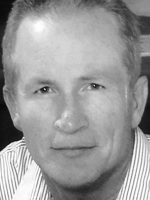 Perry Frank graduated from Oak Hill High School in 1974. His senior year he averaged 24 points and 16 rebounds per game as Oak Hill posted a record of 17-4 and won the MIC with a perfect record of 7-0. He was named conference player of the year among many other honors.

He went on to play for Indiana Wesleyan University (then Marion College) graduating in 1986. He is Indiana Wesleyan’s all-time leading scorer and rebounder compiling 2,452 points and 1,691 rebounds. He was named MCC all conference 4 years, NCCAA All-American four years, and NAIA all-district four years. He was the NCCAA National Player of the Year in 1986. He was also named to the NAIA Academic All American Team.

Perry was coached in high school by Jack Keefer and in college by Rocky Kent. He credits both of these men for helping him reach his potential as a basketball player.

He has been an active member of Liberty Baptist Church, Sweetser, Indiana for 35 years and has been in the car business his entire life. He is the owner of Perry Frank’s Auto Sales, Alexandria, Indiana.

Perry has been married to Judy, his high school sweetheart ,for 41 years. The Lord has blessed them with 3 children, Ryan (Beth) Frank, Nick (Kristy) Frank, and Christin (Joe) Becker. They have 7 grandchildren.

After living in Grant County his entire life, Perry moved to Kokomo 2 years ago where he currently resides.