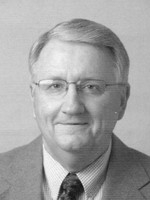 Paul Patterson has become a small school coaching legend during his 31 years at Taylor University. Replacing Don Odle, another Grant County Sports Hall of Famer, in 1979, Pafferson's Trojans teams have compiled a 678-337 record for a 68.8 winning percentage.

At Taylor, Patterson guided the Trojans to 15 conference and 14 NAIA National Championship tournaments. He has won 12 different coach of the year awards, including 1990-91 NAIA National Coach of the Year, and was inducted into that organization's hall of fame in 1995. In this past season, Patterson coached in his 1,000th collegiate game.

Patterson's greatest season was 1990-91 when the Trojans finished 34-4 and advanced to the NAIA Final Four. Taylor upset No. 1-ranked Wisconsin-Eau Claire in the quarterfinals before losing the next game 66-60 to Central Arkansas.

Before Patterson arrived, Taylor had never been to the NAIA National Tournament or won a conference championship. The Trojans broke through in 1984 with the NAIA District 21 title and then had 10 consecutive seasons with 25 or more victories.

Not all of Patterson's success has come on the court. Every young man to play four years for Patterson has earned a college degree, and nine received NAIA scholar-athlete honors. He's also coached 22 players to NAIA All-America honors, and 24 were named to all-district or all-region teams.

A native of Hammond, Patterson played basketball and baseball at Morton High School and Hanover College, where he was enshrined in its athletic hall of fame. The summer before coming to Taylor, he coached the Kentucky All-Stars to a pair of victories over Indiana's finest.

Patterson and his wife Phyllis have two children, Michelle and Shannon.