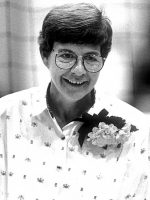 Pat Zehr, former Jasper High School volleyball and track and field coach., passed away in October of 2011. Pat was involved in girls’ high school athletics for over 33 years.

Coach Zehr was the first volleyball coach at Jasper High School. From 1973 to 1997, Pat compiled a 600-129 win/loss record, acclaimed 21 sectional, 13 regional, and 3 semi-state championships. In 1991, the Jasper High School team was state runner-up. Numerous athletes won all-state and academic all-state honors as well as all-conference honors. She was honored as the Indiana Coaches of Girls’ Sports Association (ICGSA) District Volleyball Coach of the year in 1991 and 1997 and coached the ICGSA South All-Star volleyball teams in 1991 and 1993. Due to her many accomplishments and contributions to the sport of volleyball in the state of Indiana, she was inducted into the Indiana Hall of Fame in 2010. Pat is still considered by her peers as one of the best volleyball coaches in the state of Indiana.

Coach Zehr also started track and field for girls at Jasper High School. In track, she compiled a 230-62 record, won 10 sectionals, and 14 conference titles. She coached 76 state finalists and 1 state champion. In 1975-76, the ICGSA established the Phyllis L Tubbs Service Award to honor a member who established longevity through several years of service to girls’ athletics. For her service in volleyball and track and field. Pat was chosen as the 2009 Phyllis L. Tubbs recipient.

Upon retirement from Jasper High School, Pat returned home to Gas City. While in retirement, she coached the Mississinewa Volleyball team for two years from 2000-2002. During that time, the Mississinewa team had their first winning record since the program started and that record stood until 2012. Pat’s coaching credentials are immense. Of even more significance was Pat’s Influence and positive impact on the many athletes she taught and coached. Pat was an intense competitor who expected excellence and discipline of herself and her athletes. Her passion and enthusiasm were contagious to her players. Her faith in her players and her teams created loyalty and teamwork that led to much success.