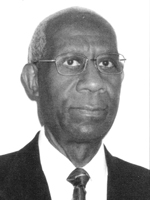 Oatess Archey was an outstanding athlete and student at Marion High School. He won the 1955 IHSAA 120-yard high hurdles with a state record 14.5 seconds. He was an all-state end in football and a starting forward in basketball. He was one of the first five Marion High School alumni to be honored in the school's Hall of Distinction. Archey was named the top all-around Marion High senior athlete in 1955.

Archey went to Grambling University in Louisiana where he got a bachelor of science degree in physical education. Grambling was known for football but Archey excelled in track. He became a college track all-American. He competed in the NAIA national track meet in San Diego, California and got seventh in the high hurdles. Later Archey was an alternate in the 1960 Summer Olympics in Rome.

Later, Archey was a successful head coach in cross country and track at Marion High School. Many of his athletes made all-state. He then was an assistant track coach at Ball State University.

Archey turned to law enforcement. He was recruited into the FBI and became a highly decorated FBI agent and later was a two-term sheriff (1999-2007) and the first black sheriff not only of Grant County, but in the state of Indiana. Archey was highly respected and became a father figure. He taught many young men some important life-long lessons. He was and is a caring, compassionate, ethical man who became an exemplary role model.