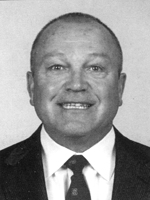 The late Dick Dickey, an all-American at North Carolina State, tells the best Monte Towe story. Scouting for Wolfpack head coach Norm Sloan, Dickey turned Sloan on to John Mengelt, then an Elwood shooting star. Sloan passed and Mengelt went on to become Auburn's all-time leading scorer. The next player Dickey recommended to Sloan was Monte lowe and the rest is history. After an incredible run at Oak Hill as the quarterback of two unbeaten teams and the point guard of a Sweet 16 team in basketball, Sloan gave Towe a chance and in 1974 Towe helped the Wolfpack to the NCAA basketball title and put an end to John Wooden's run of seven national crowns in a row. Towe went on to a pro career with the ABA's Denver Nuggets. Then entered the coaching ranks under his college coach, Sloan at the University of Florida. After many seasons as a successful head coach, the last at New Orleans, lowe is now back with his alma mater, North Carolina State, as associate head men's basketball coach.

Towe was a driving force in getting both Julius Mays and Scott Wood of Marion to attend North Carolina State.

Towe has been voted to every all time Grant County basketball team. Many consider him one of Grant County's best all around athletes ever. Towe was recently designated a legend by the Atlantic Coast Conference.

Monte's one bad break was coming along before class sports. His football and basketball teams at Oak Hill would have been strong contenders for state championships. Towe also competed in golf and baseball with the Golden Eagles.