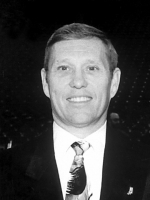 Mike Crouch graduated from Mississinewa High School in 1963 with a strong desire to devote his life to teaching high school Social Studies and coaching basketball. The following September, he enrolled at Ball State University where he pursued and completed his Bachelor of Arts in Education and Master of Arts in Education degrees. His final quarter of study at BSU was completed with an internship at Marion High School under the guidance of Jack Colescott, the ultimate Social Studies teacher. Colescott was instrumental in Mike being hired at MHS in 1967, where he was blessed to teach for the next 40 years, culminating in his retirement in 2007.

Mike never became a high school coach, but in 1972 he was persuaded by his close friend and church buddy, George Dyer, a second generation Indiana High School Athletic Association basketball and football official, to try officiating to see if it was a good fit for him. Mike was so intrigued that he sought and acquired licenses in both sports. Immediately, he was hooked. He loved being on the court or field with the student athletes, as well as intermingling with many of the state’s finest coaches and athletic directors. As a devoted IHSAA official, Mike was blessed to be mentored by some of Indiana’s best officials including his partner, Jim Cox, as well as Gene Linn and Marty Burdette.

With a lot of hard work, patience, passion, and family support, Mike was able to referee a total of 31 years in basketball and 36 years in football, while working in 7 of the 10 largest high school gyms in the state and nation. In addition to high school gyms, he also officiated in Hinkle Fieldhouse (his favorite venue), Purdue University, University of Evansville, Fort Wayne Coliseum, Conseco Fieldhouse, Market Square Arena, Lucas Oil Stadium, and the Hoosier Dome. Without officiating, these experiences would never have been possible.