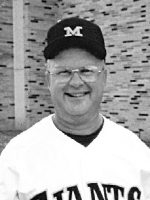 The Marion baseball coach and assistant athletic director, Wysong had a tremendous impact on many during his lifetime. His significant contributions to Marion, its youths and anyone he came in contact with will remain.

Wysong will be remembered for the success he enjoyed in 13 years of coaching Marion baseball. He compiled a 275-127 record and won more games than any other Marion coach. He took the Giants to the state championship game three times, winning it all in 1984 and finishing second in 1986 and 1991. Wysong also played for the state runner-up Giants in 1968.

Wysong excelled in getting the most of his players and helping them develop their skills.

He was an aggressive coach, a fun man to watch coach the game. Rather than sit back and wait for something good to happen, he often forced the action. More times than not, it worked in his favor.
In 13 years of coaching, Wysong understood the importance of letting his players succeed. He liked to steal bases and give his players every chance to come through at the plate.

Good friend Bill Green often encouraged Wysong to use the bunt more in baseball. Wysong would always remark back about his dislike for the bunt and add that Green, winner of six basketball state titles, should stick to coaching basketball.

Head Coach Mel Wysong, in his 3rd season at the helm, had his Giants ready for the season, getting off to a very impressive start. However, the team hit a slump midway. Coach Wysong refocused his team and the season turned around for the Giants. They won 21 of their next 25 games, including 9 wins in post-season play capping the season as State Champions.

Upon his passing, Mel was survived by wife Martha, son Michael, and daughter Melissa. ﻿