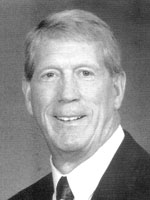 Marty Burdette was a valuable asset to Mississinewa Athletics from 1950-1954 in football, basketball, and track. In basketball he was one of the leading scorers on the team which won the Grant County Tournament, Sectional, Regional, and making it to the "Elite Eight". Marty was-named "All Tournament" in all four tournaments. He was on the Indiana All Star team being listed in the Top 100 Basketball Players in the state.

In football Marty played end for the Indians gaining Mississinewa Valley Conference honors for leading the team in tackles. He played in the East-West Indiana All Star game at Butler University and was listed in the Top 100 football players in the state.

The University of Miami was the next step along his prestigious athletic career being a three year starter in basketball earning numerous awards - team captain in 1958, career 1000 points, Second Team SSC 1957, First Team SSC in 1958. In 1958 he was inducted into the Iron Arrow Society, the highest Honor Society on campus at Miami.

Marty coached several Little League baseball and basketball teams upon his return to Gas City after graduation from Miami. In addition, he served his community on the Board of Trustees for Mississinewa Schools.

Marty earned a BBA degree in Management from The University of Miami and was Production Manager of Owens Illinois in Gas City, Waco, Texas, and Streator, Illinois. Marty has been married to his high school sweetheart, Janet, for 56 years. They have three children, Connie, Brenda, and Monty. Marty resides in Plant City, Florida.