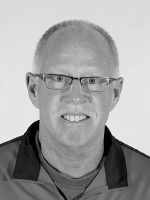 Mark Yordy graduated from Gridley, IL High School, Taylor University, and Ball State University. After one year at Blackford Community Schools. Mark was hired by Oak Hill High School as the Aquatics Director and started the swimming & diving program. He would spend the next 38 years teaching and coaching for the Golden Eagles.

In 1983 Mark started the Oak Hill Swim Club and three years later Swimming and Diving began as a varsity sport for Oak Hill. With a philosophy that “becoming a better person was far more important than becoming a better swimmer,” the Oak Hill Swim Program grew into one of the state’s best small school programs. For 31 seasons the girls team compiled a dual meet record of 367-49-1 (.882), won 26 Conference Championships, 9 Undefeated Seasons, won 106 consecutive dual meets from 1992-2000, the team was featured on RTV6 Indianapolis, won 27 invitational championships, and 30 State Finalist. Coach Yordy also received the Kokomo Sectional Coach of the Year Award in 96-97, 97-98, and 98-99; Jay County Sectional Coach of the Year in 01-02 and 03-04; and the Fishers Coach of the Year for 16-17. Mark was also selected as the Indiana Coaches of Girls Sports Association “District Coach of the Year: in 1997, 1999, and 2004.

Mark has been supported by his wife Colleen and their two children Kelli (Andy) Nuesser, and Brad (Kelly) Yordy throughout his career. Mark is now coaching a new team made up of his 6 grandchildren (Max, Molly, Mason, Soren, Addi, and Tiege).