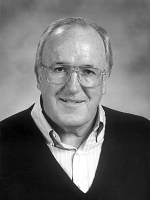 Mark Surface was born May 31, 1945, to Homer (Dutch) and Dorothy (Dot) Surface in Lafayette. The second of three children and only son gave Mark a ready-made cheering section as he pursued his athletic interests. Mark began playing tackle football as the only sixth grader on the seventh and eighth grade team. He played 4 years of high school football for Lafayette Jeff, who recorded a 9-1 season his senior year. Mark also played on Jeff’s state finalist basketball team. Mark enrolled at Ball State where he was a three year starter at LB and TE. The Cardinals played in two Grantland Rice Bowls in 1965 and 1967 and were undefeated in 1965. Mark met his wife of 48 years, Jill, at BSU, as she was a cheerleader for the Cardinals. Their son, Matthew, was a captain in football and baseball for the Giants as well as a two year captain of the IU football team. Their daughter, Sarah, worked in the football office at IU.

During his 39 years as a head coach, Mark’s team won 257 games, numerous conference championship and 2 state runners-up. Marion is the only school in the 90 year history of the NCC to play in the State Championship game. Coach Surface has won more games than any coach in Marion football history. When Mark retired, he ranked 4th among active coaches and 12th all-time in wins in the state of Indiana.

Coach Surface started his coaching career in 1968 at Fremont High School. He spent two years at Union City, one year at Plymouth in 1971, and four years in Logansport from 1972-1976. From 1977-1984, he was in New Castle before making his mark at Marion from 1985-2006. Coach Surface was inducted into the State of Indiana Football Hall of Fame in 2012, the New Castle Hall of Fame and Ball State University Hall of Fame in 2013. Coach Surface was named a conference coach of the year 11 times in his career and the Indiana Sportscasters and Writers Coach of the Year in 1989. He was also named to the National Football Foundation Hall of Fame Distinguished American award winner in 2007.