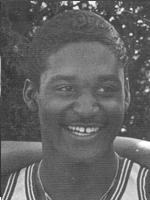 A consummate team player, Lyndon Jones started playing basketball early on at the Boys & Girls Club, always dreaming of being the next Mo Tyson wearing the purple and gold. Little did he know that there were four other young boys in Marion that shared that same dream. Teamed with Jay Edwards, Daric Keys, Kyle Persinger and Eric Ewer, Lyndon achieved his dream of wearing the purple and gold and soon led a team known as the dream team that would compile an 85-4 record and 3 consecutive state championships over 3 years. These accomplishments would earn "Purple Reign" a place in Indiana High School Basketball history as one of the best teams ever. As for individual accomplishments and records; he was a 3 year varsity starter, shared the 1987 Mr. Basketball award with teammate Jay Edwards, member of the 1987 Indiana All-Star squad, 1987 High School All-American in several publications, member of gold medal team at the Junior Olympics, All-time Indiana High School Sweet 16 total point scoring leader, fourth all-time leading scorer in Grant County History and 1 of only 5 freshmen to play varsity basketball at Marion High School.

Lyndon went on to play 4 years at Indiana University where he was a starter on the 1989 and captain of the 1991 Big Ten championship teams as well as a member of the 1989 Gold Medal World University team. After graduating from Indiana University with a Bachelor of Arts degree in 1991, Lyndon was drafted by the Fort Wayne Fury of the CRA and the Youngstown Pride of the WBL basketball leagues where he played through the 1993 season.

After his stint of professional basketball Lyndon began his work career with Cook Incorporated in 1994. Then in 1995 Lyndon started seeking opportunities that would allow him to utilize what he believed were his best attributes; leadership and understanding people. In late 1995, Lyndon moved on to General Motors in Detroit, Michigan where he quickly moved up the ladder while occupying many managerial positions.

After being gone from Indiana for more than 10 years, Lyndon and his wife quickly accepted this opportunity to come back home. Lyndon has been with Cummins Inc. for almost 6 years and holds the position of Director of Labor Relations for Southern Indiana. Lyndon and his wife Sophia currently reside in Fishers, Indiana with their two daughters: Lark Jones (11) and Lyricn Jones (10).