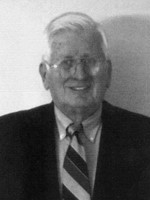 Larry Hedden is one of the finest basketball players to ever come out of Grant County. A 6-foot-5 center, he was almost unstoppable in the post, and he ran the floor well enough to score on the fast break.

A two-year standout at Mississinewa, Hedden scored 1,162 points (21.5 per game average) and led the Indians to a pair of sectional championships and a regional title in 1954. He was the first Grant County player to average more than 20 points a game and accomplished it twice in the 1953 and '54 seasons. Following his senior season he became the first county player not from Marion to make the prestigious Indiana All-Star team.

With Hedden in the pivot, the Indians won 51 of 54 games in the 1953 and '54 seasons. Mississinewa won all 21 regular season games it played in '54 and lost to No. 1-ranked Muncie Central in the semistate championship game at Fort Wayne.

Many major Division I colleges sought Hedden, including legendary Kentucky coach Adolph Rupp. Instead, he chose to play for Michigan State and coach Forddy Anderson and was a three-year starter for the Spartans.

In Hedden's junior year the Spartans won the school's first Big Ten championship and made their first NCAA Final Four. Hedden finished with 17 points and 17 rebounds in the Spartans' three-overtime semifinal loss to North Carolina, which then upset Wilt Chamberlain's Kansas team in the final.

The NBA's Philadelphia Warriors drafted Hedden in 1958, but a bout with polio ended his professional aspirations. Hedden was named to the 1979 Silver Anniversary Team and elected to the Indiana Basketball Hall of Fame in 1998.

Hedden and his wife, Ada, have been married 55 years and have three children. A successful businessman, he retired as president of Dynamic Metals in New Jersey and now resides in Birmingham, Alabama.