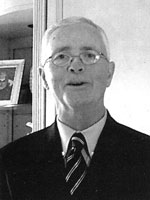 Kerry Clevenger has two pastimes dear to his heart- sports and supporting his community. His family, friends, and many memories, are a priority after more than 45 years as a loyal spectator, financial supporter, and coach for Grant County athletics.

As a Swayzee Speedking in 1958, playing for longtime mentor and Coach, Jack Colescott, a love for sports began. Kerry admired Coach Colescott's organizational skills, strong faith, and his love for history and US Government. As an adult, Kerry learned that hard work would afford him the ability to help friends, and support many athletic programs and community organizations.

He began his coaching career in 1969 with an AAU basketball team that won the state championship. Kerry has coached youth sports for more than 40 years, including several AAU teams, Lincoln Little League, Pal Club coach's pitch, YMCA youth basketball, and currently coaches 3rd & 4th grade Boys' and Girls' Club basketball team. He has helped many young athletes financially and as a role model. He sets high standards for his players and expects the best from them on and off the court.

In addition to coaching, Kerry is a dedicated sponsor of Grant County athletics. He sponsored the Plymouth Club Bombers basketball team from 1968-71, and the Plymouth Club Bomber softball team from 1970-2012. He has been a supporter of Lincoln Field Little League, Pal Club baseball and soccer, and was a member of the Pal Club Board of Directors from 1990-96. Continuing on, Kerry served on the Marion Giant Booster Board (1976-2012) and the Marion Urban League in the 1990's. In recent years he has become a loyal Marion Lightning Soccer and Community School of the Arts fan. Kerry is widely known as an all-round enthusiastic sports fan. Many groups and organizations have benefited from the generous use of Crest Lanes in support of their fund raisers.

Kerry's giving heart and financial support have earned him many community and state awards receiving the Sertoma Service to Mankind in 1990, Mr. Pal Club, 1991, NAACP Community Service Award 1995, Indiana Sagamore of the Wabash, 1998, Marion Bowling Hall of Fame, 2005, and Indiana Softball Hall of Fame in 2009. Kerry resides in Marion with Wanda, his wife of 49 years. In addition to his coaching, he spends most evenings at high school or middle school basketball games. On weekends, he and Wanda travel across Indiana to watch their seven grandchildren play soccer, basketball, baseball, football, and dance.