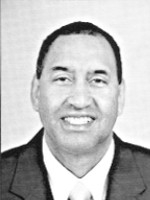 One of the most skilled offensive players to don a Marion Giants uniform, Joseph Price takes a place in the Grant County Sports Hall of Fame with older brother Jovon Price (2011). In three seasons with the Giants, Joseph was a three-time all North Central Conference selection, named Grant County boys’ player of the year twice, and made second team All-State in his senior year.  As a sophomore, Price helped lead the Giants to a NCC championship and the state finals. Two of his teammates were hall of famers James Blackmon (2009) and Jeff Todd (2011). The Giants lost in the semifinals to eventual state champion Indianapolis Broad Ripple.
to eventual state champion Indianapolis Broad Ripple.﻿

The next year, Price starred on a second consecutive NCC championship team that was ranked No.1 by the Associated Press during the season and advanced to the semi state final. In his senior season, Price helped the Giants achieve another top 10 ranking, runner-up NCC finish and a third straight trip to the semi state.﻿
Price graduated as Marion’s second all-time leading scorer with 1492 points behind Dave Colescott (2009) and ahead of 2014 inductee Harold Curdy. He set a school record for most consecutive free throws in a game (17) and scored a single game high of 39 points.﻿
From Marion, Price moved on to Notre Dame University and played four seasons for famed coach Digger Phelps. Price helped the Irish to a runner-up finish in the NIT tournament in 1984 and NCAA Tournament appearances in his final two seasons. Price helped the Irish to an 84-37 record during his stay in South Bend and a top 10 AP ranking in his senior season.﻿ Price was a seventh round draft pick of the Washington Bullets (now Wizards) and embarked on a 13-year professional career in Europe, where he joined his brother.﻿
Following his playing career, Price entered the coaching ranks at Indianapolis Manual High School in 2001-02 and after one year joined the staff at Indiana-Purdue University-Indianapolis. Price helped the
Jaguars qualify for their first NCAA Tournament. Price then joined Ball State University’s staff for three seasons, and the Cardinals won the Mid-America Conference West Division in 2008-09. His coaching
career took him to Morehead State (Ky) and Lamar (Texas) where he was a top assistant under Pat Knight.
In 2012, Price was named head coach at Grambling State (La) where he recently finished his second season with the Tigers. Price was named to the Indiana Basketball Hall of Fame Silver Anniversary team in 2007. He has a degree in sociology from Notre Dame and has a daughter, Naomi.