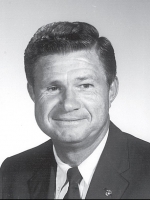 John Fredenberger was born in Marshall Illinois, and graduated from Marshall Township High School when he was sixteen where he played football and basketball. John went on to attend Indiana Central College,which is now The University of Indianapolis. He played football and basketball for the Greyhounds from 1939-1942. The 1942 basketball team went undefeated and was ranked 3rd in the Midwest and 9th in the nation. The team was inducted into The University of Indianapolis Athletic Hall of Fame in February 2010.

Upon graduation, John enlisted in the United States Marine Corps. He was assigned to the Marine Barracks Naval Training Station in Great Lakes Illinois. He continued by attending Officer’s Training in Quantico,Virginia. John graduated as a Second Lieutenant. He served for four years, which included two years in the South Pacific, and earned two Purple Hearts and a Bronze Star for his bravery and injuries sustained.He retired as a Major in the United States Marine Corps Reserve.

Following graduation from Indiana State University with a Master’s Degree, John was hired as a history teacher and assistant basket ballcoach at Gas City High School in 1946. The next year he was appointed the head coach and remained in this capacity when Mississinewa High School was formed. He coached for sixteen years, while maintaining a record of 247-97. His teams won two sectional titles, one regional crown, four Mississinewa Valley Conference flags, and six Grant County tourney championships.

The 1954 basketball team went undefeated in the regular season,losing only to Muncie Central in the semi-state finals. The ’54 team was inducted into the Grant County Hall of Fame in 2010.
﻿
Mr. Fredenberger resigned from coaching basketball in 1962 to become athletic director and assistant football coach. In 1966 he became assistant principal of Mississinewa High School and in 1978 he was promoted to principal. He retired in 1981 after 35 years in education.

In January 2007, John received the honorable recognition of having the gymnasium floor at Mississinewa High School named “The John Fredenberger Court”.

﻿All of these accomplishments have come from hard work and dedication. John passed away in 1983 of Amyotrophic Lateral Sclerosis which is more commonly known as Lou Gehrig’s Disease. John Fredenberger was a disciplinarian, motivator, and always had high expectations for the students and players that he was involved with. He is remembered fondly by his family, former students and athletes.