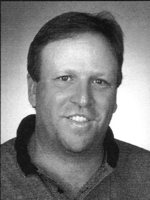 Jim Gallagher Jr. easily ranks as the greatest golfer to come out of the talent rich Grant County area of Indiana. Gallagher was a standout at both Marion High and the University of Tennessee.

Before turning pro in the early 1980s, Gallagher won the Indiana State Amateur and State Open.

He has recorded five wins on the PGA Tour headlined by his 1993 victory in the season ending Tour Championship. His best year on the tour though may have come in 1991 when he finished 17th in the Masters, 11th at the US Open, and then in front of many adoring fans was third in the PGA Championships played in nearby Carmel, IN. Other high points of Gallagher's career came in 1993 when he helped lead the USA Team to a victory in the Ryder Cup, and also a win in the President's Cup in 1994.

Jimmy went on to trade his putter for a television microphone and became a fixture on many PGA Tour national broadcasts. However successful Gallagher may have been as a pro his lasting memory in Marion was helping to set up the annual Jim Gallagher Jr. and Friends Skins Game where he exposed local fans to pro golf and raised hundreds of thousands of dollars for youth golf, in the Marion area. Also, Evan Bayh awarded Gallagher the Sagamore of the Wabash, the highest honor a governor can award a Hoosier.

Gallagher is married to Cissye, herself a former LPGA player and many times a state champion in her home state of Mississippi. Jimmy Gallagher also owns the all-time one round record at the Meshingomesia Country Club where he fired a 59. The MCC also saw Gallagher win many Grant County titles before turning pro.