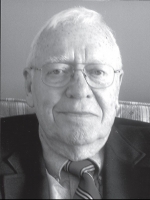 At an early age, Jim Barley developed a passion for basketball that has lasted a lifetime. During his elementary days he played for the school teams during the season, but, spent most of his time playing basketball on outdoor courts in the alleys of Marion.

Jim played on the 1952 Indiana All-Stars and was named to the 1977 Hall of Fame Silver Anniversary Team. Barley played at Indiana University where he was a three year letterman and played on the 1954 Big Ten Championship Team.
﻿
After serving as assistant coach at Van Buren High School, Barley became head coach at Urbana,now part of Northfield, compiling a three year record of 43-21.

Barley continued his coaching career for three seasons at Montpelier (record 39-28) winning the Portland Sectional Championship in 1965. Fromthere he became head coach at Scottsburg coaching through 1978 with an overall record of 193-99. His 1969 team went unbeaten in the regular season and averaged a state record 90.0 points per game.

Coach Barley never had a player over 6’4”, was a pioneer in weight training as a basketball coach, and his trademark in coaching was the full court press for 32 minutes –every game.

﻿In addition to attending basketball games, Jim is an avid fisherman  and hunter. His African Safari trip was the highlight.

Jim Barley was inducted into the Indiana Basketball Hall of Fame in 2005.