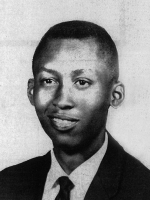 Jerry was born and raised in Marion where basketball reigns supreme. His love for athletics was rooted deep as a child on the little league baseball fields under the guidance of his dad, Charles Townsend. Thanks, in part ,to childhood games running up and down Boots street, Jerry moved his interests to track and field where he quickly excelled at Marion High School. Coach Oatess Archey has been known to say that Jerry was the most natural, fluid, and smoothest runner he ever had the honor of coaching. Jerry was a standout in the 100m and 220m events.

Throughout Jerry’s high school days his most notable accomplishments came on the basketball courts sporting #24. Jerry was a three year starting forward for the Giants and made three IHSAA State Finals appearances in ’67, ’68, and ’69. The 1968-69 Giants Boys’ Basketball team was inducted into the Grant County Hall of Fame in 2014.

After graduating from MHS, Jerry attended the University of Washington- Seattle on a scholarship until a knee injury brought him back home. Jerry found his second passion as the Director of Parks and Recreation for the City of Marion, ensuring that the baseball and softball diamonds were kept in tip top shape and ready to play ball. Jerry was the spearhead in partnering the City of Marion (Christmas City USA) with General Plastics to begin and grow the Walkway of Lights in 1991. When Jerry wasn’t overseeing that, the city parks were kept as beautiful and inviting as possible. He was officiating softball, baseball, and basketball every chance he got. He made homes of the PAL Club, Boys and Girls Club, city parks, Lakeview Christian School, Lincoln Field and all across the state of Indiana anytime he was requested to call balls and strikes or blow the whistle.

Officiating constantly stoked the fire of Jerry’s love for basketball. He knew that he couldn’t lace up for play any longer so he turned his sights to coaching. Jerry had top notch coaches along his journey, Oatess Archey and Colescott, and knew the impact that can be made on a child’s life. He wanted to share not only the fundamentals of the game, but the love of it. Jerry coached the Lady Giants and was assistant for the boys. He was assistant coach for the boys IHSAA State Championship bid with the 2nd resulting in a championship in 2000. You got your ring Jerry!

In 2007, Jerry left Marion, but took with him his love of basketball and coaching to Missouri- the “Show-Me State”; where he showed them a thing or two about a thing called Hoosier Basketball. Jerry coached the Wolf Pack basketball team in Cape Girardeau, MO and served as a board member of the Boys and Girls Club until his passing on Father’s Day 2011. Jerry was brought home to Marion for the final time and laid to rest after his long battle. Odds were stacked against him with the attitude “Giants Fight Never Die!” Jerry spent 35 wonderful years with his wife, Jimmie Bibbs-Townsend. Together they had two amazing children, Deius and Alisha. Jerry also has two beautiful granddaughters, Maliyah and Marlee.