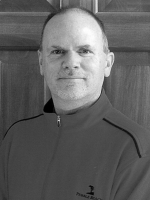 Jay became interested in tennis at the age of eight and was introduced to the game by his father, Jim. Jim would take Jay to Matter Park’s tennis courts and he would play there almost every day. By the time he was 12, he started playing in the USTA sanctioned tournaments, and at 18, he was ranked #1 in northern Indiana.

During Jay’s tenture at Marion High School, he achieved a 66-7 record and became the first Marion Giant to earn first team All-State Honors.

After high school, Jay accepted a tennis scholarship to play at Indiana Wesleyan. He was the #1 player all four years and compiled an 80-0 record in singles and a 70-5 record in doubles. Jay’s combined career record from high school to college was 216-12. He was four time All-Mid Central Conference and four times NAIA District Champion. Jay ended his college career ranked #21 in the country.

After college Jay participated on the Deaf Tour. He was ranked #2 in the USA and #3 in the World. During his tour, he helped the USA earn their first Dresse Cup. He also won one gold, two silver and one bronze at the Olympic Games representing the USA.

He competed in tournaments in Europe and the USA. During his tour he met his wife Sally, who was the British #1 and World ranked #2 player for the Deaf.

Jay and Sally have been married for 22 years and live in Fort Wayne. They have a 17 year old son, Joshua and a 14 year old daughter, Chloe.

Jay enjoys playing tennis, and loves to “hit” with his wife. His hobbies include, spending time with his family, his mustang ,and watching his son fly aero dynamic airplanes. He likes watching his daughter play tennis… if she lets him!