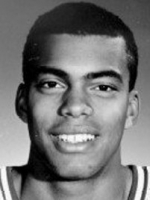 Edwards’ gracefully, effortless play and picturesque jump shot earned him the nickname “Silk”, and he helped lead the Giants to some of their greatest moments. The 6-foot-4 Edwards provided the scoring spark for the Giants’ three consecutive state champion teams of 1985-87 and he shared Indiana Mr. Basketball honors with teammate Lyndon Jones.

Edwards first gained attention as a sophomore when he starred for the 29-0 “Purple Reign” Giants team that breezed to the school’s fourth state title. During the next two seasons his reputation grew as the Giants chased down two more titles, the first team since Franklin in 1920-22 to accomplish the feat.

Following the third state title Edwards was named co-Mr. Basketball with Jones and also garnered Parade Magazine and USA Today All-America honors. Edwards finished as Marion’s second all-time leading scorer with 1,860 points without benefit of the 3-point shot, which wasn’t adopted for high school until the year after he graduated. Marion High School has retired his No. 12 jersey number.

Edwards took his long-range shooting to Indiana University, where he led the Hoosiers to a Big Ten title and was named Big Ten Freshman of the Year. For an encore, he won Big Ten Player of the Year honors in 1989 and was a consensus second team all-American.

After his sophomore season at IU Edwards declared for the 1989 NBA draft and was picked in the second round by the Los Angeles Clippers. Edwards played four games over two seasons for the Clippers and then had a lengthy pro career in the Continental Basketball Association.

Edwards has returned to the Marion area and is working on completing his degree at Ball State University and wants to embark on a coaching career. He also is teaming up with Jones and another former Mr. Basketball, Woody Austin of Richmond, to start a basketball camp. His son Jay Edwards Jr. was a three-year standout for Marion and helped the Giants to a Class 4A state runner-up finish in 2008.