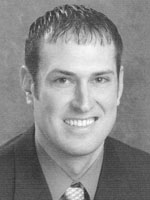 Jarrad OdIe's basketball career started at age 5 at the old YMCA in Marion and continued through the Marion Boys' Club, Pal Club, AAU, Oak Hill High School, ending as an Indiana University player on the biggest stage in college basketball, the Championship game of the NCAA Tournament in Atlanta, Georgia.

Jarrad excelled in basketball and baseball, with baseball being his favorite, but basketball showed more promise for future endeavors. His career in basketball soared while playing three varsity seasons at Oak Hill and with numerous AAU teams. He led the state in scoring his junior year averaging 29 points a game. His senior year he finished 5th in the state averaging 26 points and 12 rebounds per game. Jarrad holds the record at Oak Hill for most points scored in a career with 1465, and the single game scoring record of 50 points his junior year. Jarrad was All- Conference and All State in both junior and senior years, Co-Player of the year in 1997, and Grant County Player of the Year in 1998.

﻿During his outstanding career at Oak Hill, Division I teams were taking an interest in Jarrad. He had two pivotal seasons under the direction of Coach Knight at Indiana University. The next two seasons were spent adapting to the coaching style of new Indiana coach, Mike Davis. The years with Coach Davis were successful years for Jarrad, as he was named captain of their Big Ten Championship team which was the runner-up in the NCAA Tournament.

Jarrad played an essential role as a team leader guiding the Hoosiers to their first Final Four in nearly a decade. Jarrad played in 109 games averaging 4.9 ppg, 3.2 rpg, and .5 apg. In his senior year he was Co-Captain of the Hoosiers starting each game of the Big Ten season and post season. The best week of his career was February 2, 2002, scoring Ia total of 38 points with 23 rebounds versus Iowaand Louisville. Jarrad was Big Ten Player of the Week, Dick Vitale - National Player of the Week, The Chevrolet Scholarship MVP, and Payne Webber National Senior of the Week. Jarrad was Academic All Big Ten in 2001.

﻿After college Jarrad began in the Pharmaceutical Industry, soon switching to the financial world where he is currently with Edward Jones in Marion. Jarrad ,. is married to his high - school sweetheart, Misty, and together they reside in Greentown, Indiana, 4 with daughters Jenna and Josie.
﻿