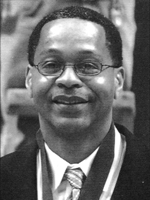 James Blackmon attracted attention at an early age in the Marion PAL Club Basketball League. Even before he entered junior high school, he had the tag of "can't miss"on him. He had all the signs of becoming a great player.

Sports Hotline wrote a story about him scoring something like 61 points in a PAL Club game. Sometime after that, the Hotline remembers a courteous but confident youngster came up to the Hotline publisher at a high school game and quietly but calmly said words like "thanks for putting that in the paper but I scored 62 in that game."

Blackmon could play the game of basketball. He was one who was born to play it. The 6-3 Blackmon could jump out of the gym and that's not stretching the imagination too much. He could handle the ball and for sure he had various ways of putting the ball in the basket. He could shoot from out, he could drive to the hoop and some of his dunks were legendary.

Blackmon, who was promoted to the varsity as a freshman just before the Richmond game, scored a school and county record, 1,897 points in his sparkling career as a Marion Giant. His playing years were 1980-83. He played 97 games for the Giants and his career scoring average was 19.56. He has the three highest scoring game totals in Marion's rich history as he had 52, 50 and 43— all in the 1982-83 season. He also had games of 41 and 40 points that season.Blackmon also holds other school career offensive records. Blackmon's 52 points came in his last game as a Marion Giant when his team lost to Anderson 89-87 in two overtimes in the first round of the single class state semifinals. Blackmon was a first five selection on the USA Today All-America team as a high school senior. A lot of schools were hot after Blackmon, but he chose the University of Kentucky. He had a solid playing career for the Wildcats. He was drafted by the New Jersey Nets of the NBA and was one of the last cuts. He then played in some of the pro basketball minor leagues for a few seasons. Blackmon returned to the University of Kentucky and got his degree, which became one of his life highlights away from the basketball court.