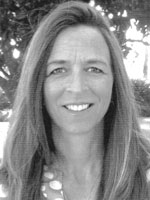 Growing up on a golf course, it was only natural Jackie Gallagher Smith would take up the game. Yet, she not only played but excelled everywhere from her home Meshingomesia course in Grant County to the legendary links of Great Britain.

﻿Gallagher-Smith joins older brother Jim Gallagher Jr. in the Grant County Sports Hall of Fame, and the entire Gallagher family was part of the hail's inaugural 2009 class for meritorious service. Jackie earned her place through more than a quarter-century of accomplishments at the amateur, collegiate and professional levels.

Jackie's earliest success came in local tournaments and competing for Marion High School. In 1983, she became the youngest champion of the Chronicle-Tribune-sponsored Grant County Amateur Women's Golf Tournament and set the four-round scoring record. A year later, she received the IHSAA Mental Attitude Award after leading the Giants to a runner-up finish in the state finals meet.

﻿From Grant County, Jackie went on to become an All-American at Louisiana State University and one of the top amateur golfers in Indiana. Between 1983-88, she won three consecutive Indiana Junior Girls' Championships (1983-85) and was a semifinalist ('87) and third-place finisher ('88) in the Ladies State Amateur.

Embarking on a professional career after college, Jackie spent several years on the Futures Tour, finishing seventh on the money list in 1993, before gaining her LPGA tour card for the 1994 season. She was an exempt player from 2000-09 and remains a tour member, although she has been less active while raising two young children.

The highlight of Jackie's pro career was winning the 1999 Giant Eagle Classic, Youngstown, Ohio, and she has qualified for six Lady British Opens. She also made the field in four consecutive Ladies U.S. Opens (1989-92).

Jackie Gallagher-Smith resides in Jupiter, Fla., with her husband Eddie and children O'Connor and Sullivan.