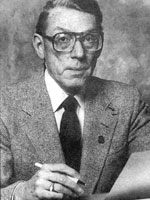 Jack Lake served as the sports editor for The Marion Chronicle Tribune for 34 years when he retired from the newspaper. However, his interest in sports didn't begin when he started with the newspaper in 1954. His family moved to Marion from Peru in 1936 when Jack and his father soon gained an interest in the Soap Box Derby, finishing as high as second in the competition. A love for competitive sports began.

Jack enjoyed participating in athletics, and watching all sports while attending St. Paul's High School. He played on the Trojan's varsity basketball teams from 1942-45. Although small in stature, Jack was known for his quickness and fiery temper on the court. During his high school years he honed his skills at writing, holding the position of Editor for The Paulist, the St. Paul Yearbook. Jack served his class as president in 1945. He attended St Joseph College and Marion College (Indiana Wesleyan University), playing basketball for both schools.
﻿
Dick Thomas, former Chronicle-Tribune Publisher, hired Jack right out of high school to work for the CT while he attended college. Working side by side with Sports Editor Bob Lee, who served as Jack's mentor, providing a variety of Grant County Sports coverage in both morning and evening papers. Jack made a name for himself when he started his daily sports column "Second Guessing", which highlighted stories about area teams, individual athletes, and coaches. In addition, the article had Jack's annual high school basketball preview, in depth team analysis, statistics, and projections for the coming season. He believed his success as a sportswriter was made possible through all the exceptional coaches and athletes he worked with during his career.

Jack additionally covered NCAA football and basketball throughout Indiana at Ball State, Notre Dame, Purdue, and Indiana. He had the privilege of meeting several race car drivers when covering the Indianapolis Speedway. In 1978 he was awarded the "Indiana Sportswriter of the Year" by the Indiana Sportswriters and Broadcasters Association. In his retirement years, Jack worked as Managing Editor of the “Sports Page", a weekly magazine published in Kokomo, and at RCA as a Specialist in Communications for Industrial Relations.

Jack was married to Mary V. "Ginny" for 46 years, and preceded her in death in 1997. Together they have three children, Rebecca, Kathleen, and Stephen, five grandchildren, and three great-grandchildren.