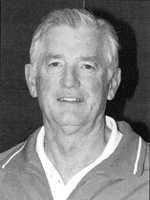 Ernest Wagner, Bill Green and Jack Keefer. What do these three gentlemen have in common? They are the only coaches in nearly 100 years of Indiana boys high school basketball to wiry three state titles in a row. Keefer probably couldn't have imagined where destiny would lead him after schooling at Oak Hill High School and then Ball State University. Jack did hit a shot to win a sectional title for the Golden Eagles and did run track for the Cardinals, but his coaching career got jump started in 1975 when he came within one play of beating eventual state champion Marion while coaching at Oak Hill.

Two years later, Keefer was named the head coach at the new Lawrence North High School and the rest is history.

School Sports Picture of Jack Keefer After over 30 years, Keefer is the only boys' coach the Wildcats have ever had, and after winning the state in 1989 with big Eric Montross, he got the chance of a lifetime to coach Greg Oden and Michael Conley in the mid 2000's. From 2004 to 2006 the Wildcats dominated Indiana high, school basketball, earning Keefer a USA Today National Coach of the Year award, his team a mythical national championship, and the Wildcats three state titles.

With four state titles, Keefer trails only Bill Green with six in all-time boys' state titles. Keefer's Wildcats hold the state record for consecutive wins with 50 between 2005 and 2006.