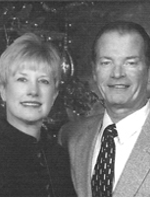 Jack Courtney and Sheryl Trueman Courtney rose from humble backgrounds in Grant County to become World Champion roller skaters in 1968 at Vigo, Spain. The pair inspired other local youths to become involved in the sport, including future Olympians Wayne and Kim Seybold.

Courtney and Trueman already had been successful skaters when they first teamed up in 1961. Jack, age 9, had won national championships in Juvenile Boys' Singles and Juvenile Pairs with partner Olga Zuniga a year earlier. By age six, Trueman already was a national Tiny Tot freestyle and speed roller skating champion.

During the next nine years, Courtney and Trueman dominated the roller skating nationals, combining to win 32 gold medals. They won one junior and four senior pairs titles together, and Courtney was a five-time senior men's champ. The two won titles in all skating disciplines, singles, pairs, dance, fours and ladies pairs.

Both had been around figure skating almost from birth. Courtney's older brother Steve Courtney had been Indiana's first national roller skating in 1956. Trueman's parents, Kenny and Dorothy Trueman, were owners of the Idyl Wyld roller rink started by her grandfather, Dewey Trueman.

In 1965, Courtney and Trueman competed in their first Roller World Championships and at ages 14 and 11 became the youngest ever competitors in the event. They rose through the ranks to finish runners-up in 1967 at Birmingham, England, before capturing the world title a year later. Courtney also won the men's singles world title at Vigo.

Courtney later was named Roller Figure Skater of the Decade by the Federation of International Roller Skating. Both attempted ice figure skating in 1970, but Trueman soon returned to roller skating and went on to finish sixth at the 1973 world championships with her new partner. Courtney was an Olympic and world team first alternate in 1972 and '76 and was third in the U.S. pairs championships in '75 and '76 with his new partner.

For several years, Courtney toured professionally and also helped produce ice show events. In 2001, Courtney and Trueman reconnected after 30 years and were married in 2003. They live in Colorado Springs, Cob., where Jack remains active in ice skating as a coach and pro shop proprietor.