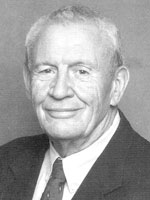 Herb McPherson is regarded as one of the best basketball players in Grant County history and considered by many to be the greatest shooter the county has ever seen. He is the leading scorer in Mississinewa High School history and third all time in Grant County, scoring 1,736 career points. He coached varsity basketball at Mississinewa and North Posey High Schools and was assistant varsity coach at Marion High School.

Herb was a starter on the varsity basketball team at Mississinewa for four years averaging 21.2 points per game his entire career. He was awarded 11 varsity letters in high school, gaining All Mississinewa Valley Conference honors four years in basketball and three years in football while playing for two of Grant County's greatest coaches, John Fredenberger, and Charlie Fisher. He was selected to the Chronicle Tribune Basketball Team of the Century in 1999.

After high school Murray State University recruited Herb to play Division I basketball for Coach Cal Luther, becoming one of the greatest basketball players in school history. He was inducted into the MSU Athletic Hall of Fame in 1989. Herb held the single game scoring record of 44 points averaging 18.6 points per game as a sophomore, 21.2 as a junior, and 21.8 as a senior. He won the Murray State Basketball MVP his sophomore, junior, and senior years. He was chosen to the Ohio Valley Conference first team both his junior and senior years and All OVC Tournament First Team his senior year.

Herb was captain of the Murray State University basketball team that was ranked 13th in the nation, playing on the team that defeated the famed Texas Western team of the movie Glory Road the year before they won the national championship. In his final game at Murray, they defeated Western Kentucky who was ranked 3rd in the nation behind UCLA and Louisville. Herb led the team in scoring with 24 points.

In 1967 Herb was selected to the Kentucky College All Star Team, along with other greats, Pat Riley, Louis Dampier, and Clem Haskins, coached by the legendary Adolph Rupp. The team defeated the Indiana All Stars coached by Tony Hinkle, 115-74 at Freedom Hall and 108-96 at Hinkle Fieldhouse. Herb was selected the MVP at both games scoring 23 and 31 points respectively. The Kentucky All Stars went on to defeat the Tennessee All Stars with Herb leading the scoring with 20 points.

After college Herb was drafted by the San Diego Rockets (now the Houston Rockets) of the NBA and the Oakland Oaks of the ABA. Herb was selected to play basketball in Europe but turned down the offers to begin his teaching and coaching career. Herb married his high school - sweetheart Laurie in 1963 They have four children Bernadette Stephanie, Jeff, and Brad, and 11 grandchildren. Herb resides in Marion, Indiana.