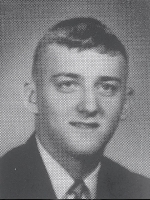 Harold was one of the finest basketball players ever to play for the Giants.He was one of only a few freshmen to play varsity in MHS history going on to become a member of the starting five for the following three years.

He had two things going for him that made him a great player – he was an outstanding shooter, and possessed that soft touch that great shooters are seemingly born with. He scored 402 points his sophomore year,468 his junior season, and 594 points his senior year. His career record for total points, 1488, remained #1 in Giant history for the next eleven years and still ranks 6th on the all-time list. The most amazing part of his offensive game was his consistency, for his total points came in just 76 games, averaging out to 19.6 points per game for his career. He still holds the MHS career record for most free throws attempted, 488, the most free throws made, 393, and the highest percentage made, .803.

He was an outstanding rebounder as well. Though he was not a great leaper and didn’t have the quickness of some players, he knew the importance of getting position underneath and blocking out. He truly enjoyed rebounding and did it very well. His career record for rebounds,769, still ranks near the top of the Marion Giant record board.

Harold was a team leader for making everyone on his team a better player, and that is truly the mark of a great player. In the 1965 season, he and his teammates were determined to turn Marion’s basketball fortunes around. After starting the season 4-3, the Giants proceeded to win 18 games in a row before losing to South Bend Washington in the Ft. Wayne Semi-State, 66-60. Their final record, 22-4, percentage wise was the best since the 1926 season.Harold led the NCC in scoring his senior year and was the top vote getter among the All-Conference selections. He capped off his basketball career at MHS with two honors -being named to the Indiana All-Star team and awarded a four year scholarship to play basketball for Indiana University.

Harold lived for severalyears in Dallas with hiswife, Barbara and theirtwo children, Joe andNora. In the late 1990’she was diagnosed with Lou Gehrig’s disease, and battled the disease for more than five years before passing away on October 28, 2003, at the age of 56.
﻿