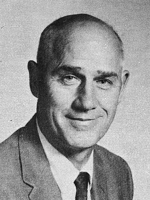 The lanky O.L. “Hack” Wilson was a standout at Noblesville High School in football, basketball, track and baseball. His senior season he combined with his younger and taller brother Mel to win the 1929 Noblesville Sectional Basketball Championship. Hack went on to play college ball at Central Normal College in Danville, Indiana. On the gridiron, he played end with Grant County players Art Gross and Charley Steidel. Hack sat out a couple of years when he married Grace Miller of Upland who had just graduated from the IU School of Nursing. When their first child Teil arrived during “The Great Depression,” he knew he needed to complete his degree in education to better support his family.

Upon graduation, his career in Grant County began at Matthews and Jefferson Township where he was head basketball coach for four years. Hack joined the U.S. Navy and was an NCO as a Chief Athletic Officer during WWII. His service as a Drill Instructor was evident in his coaching. Upon his honorable discharge he returned to Sweetser as baseball, basketball, and track head coach. During his fifth and final year as basketball coach, his team, the Sweetser Braves, upset the favorite Mississinewa Indians in the semis and went on to beat Jefferson Township in the final, 61-49. His future son-in-law, Bob Buroker, scored 17 points as a sophomore in the championship.

Hack loved the game of baseball. He ran the summer recreation program where he had hands-on teaching America’s past time to the youngsters of Sweetser. Youth League, Lions Club, American Legion and the Sweetser Braves were always fundamentally sound and provided tough competition. You could find him on the grounds of Sweetser School coaching kids all summer long.

Of all sports, Hack had a passion for track and field. He pole-vaulted over twelve feet in college with a bamboo pole into a sand pit. The first cinder track outside of Marion High School was in Sweetser. The other county teams used the track for their home meets. Into his late forties he was still demonstrating the pole vault over 10 feet until Principal Raymond Allen put a stop to it. Hack produced several IHSAA state finalists due to his ability to get the most from his athletes.

Hack was the first track coach at Oak Hill in 1959-60 as well as the athletic director. He provided a firm foundation for Oak Hill in all sports that flourished for years to come. He retired from his sporting life in 1966. Hack remained a big fan until his passing in 1995.