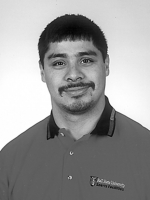 Gonzalo “Gonzo” Barajas almost did not play organized football. Small in size in comparison to the other boys his age at J.C. Knight Elementary School in Jonesboro, his mother would not allow him to register to play little league football from fear that he would get hurt. It took the urging of a neighbor friend and the promise to look over and protect him to convince his parents, Gonzalo and Juanita, to allow him to play. He was drafted and coached by three former football alumni, Willie Vallarde, Max Leavitt, and Jeff Young, and the rest, as they say, is history. Gonzo proved to be an elusive runner and showed a natural ability to accumulate yardage and score touchdowns.

Charlie Fisher’s style of play and hardnosed attitude, combined with a strong work ethic, fit Gonzo’s own determination and physical skills perfectly and allowed Gonzo to become a starter his freshman year at Mississinewa. He was part of one of the most storied football seasons in Mississinewa football history. Coach Charlie Fisher’s 1985 Mud Fighting Indians won a regional championship and came within a point of advancing to the state championship game. He was recognized as part of the “pony” backfield along with Randy Riggs and Tad Howell. He went on to be a four year starter and his senior year he led the Indians to an undefeated regular season, CIC Championship, and a Sectional Championship. He led the Indians in both scoring and rushing, with the highlight of his season coming in the sectional championship game where he rushed for 230 yards and seven touchdowns.


For his career, Gonzo finished with over 4,400 career rushing yards and 72 touchdowns. At the time the 72 touchdowns were listed as the 8th highest career total in state history. Gonzo was recruited to play football at Ball State University and went on to play for the Division One Cardinals and Coach Paul Schudel on a full football scholarship. At Ball State, he was a member of two conference championship teams.

﻿
Gonzo graduated from Ball State with a BA degree in sport administration and an MA degree in Sports Management. Gonzo has been in athletic administration at Ball State for the past 21 years and currently serves as the Associate Director of Sport Facilities and Recreation. Gonzo lives in Upland with Cassi, his wife of 25 years, and three sons, Blake, Jacob and Andrew.